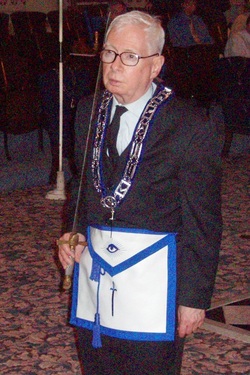 Hugh Shawen passed away Tuesday, November 18th.  His last few months were under the care of the Masonic Eastern Star Home Charities.  Hugh was a Past Master of Fort DuPont Lodge  #47 in 1978.  When that lodge merged with LaFayette #19 to become LaFayette-DuPont #19, he was Master in 1993.   He also served Nation-Stansbury Lodge #12 as Master.    It should be mentioned that he served each lodge several times.  He was active in York Rite and Scottish Rite Masonry. He was coronated a 33rd degree Mason in the Scottish Rite and served York Rite Masonry as Grand High Priest (Royal Arch) and Grand Commander in the Knights Templar.  He served as Worthy Patron in Electa Chapter, Order of the Eastern Star. He served numerous lodges as their Tiler and was recently elected Tiler Emeritus of our lodge.

Hugh was active, out almost every night.  This was quite an accomplishment as Hugh always used public transportation.  Hugh knew all the bus routes and schedules, not only traveling to events in DC but throughout Virginia and occasionally Maryland.  It is a testament to him that he never asked anyone for a ride but also to our members, who when seeing him at meetings, offered to give him a ride home. Hugh would only accept after you insisted, most times he would ask that you “just drop him off at the Metro Station or the nearest bus stop.”

For his dedication, Hugh was awarded the lodge’s Fidelity Medal and the Grand Lodge’s Distinguished Service Medal.

Hugh was an unimposing man, always humble, sincere and no matter the situation, smiling.  He will be missed.